@Tim_Coronel All I can now think of is Jason Mantzoukas saying, “G’day. Here’s ya script.” 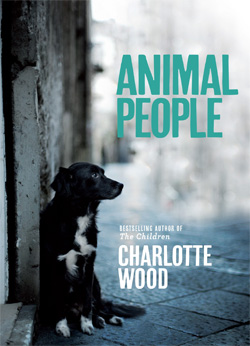 Animal People takes place over a single day, and follows Stephen, a middle-aged man whose life is partially defined by the absence of the usual markers of adult success; Stephen is unmarried, childless, owns no property, and works in a kiosk. He is haunted from the moment he wakes up by the knowledge that he must break up with his partner, Fiona, that evening. At her daughter’s birthday party, no less. And with this un-enjoyable event already hanging in the horizon like an emotional thundercloud, Stephen’s day continues to get worse.

First and foremost, Animal People is a supremely good piece of fiction. I’m sure that anyone reading Wood's prose is struck by how skilfully she manipulates it, but it’s such a pleasure to be awed in two aspects—as a reader by the story itself and as an author by the technique with which it’s rendered.

Stephen is a sympathetic yet unreliable narrator. At first, one wonders why he is so hell-bent on his plan to end what seems to be a rather good relationship, and as the day continues one comes to realise what a bad idea it is. However, of course, the reader can do nothing but watch the whole thing go to pieces. I wasn’t expecting a physical reaction while reading, but I certainly got one. By the time Stephen arrived at the party, exhausted and blindsided by the day’s events, I felt his despair and apprehension, and by the time more characters started emerging from the woodwork—a flawed jury ready to condemn him—I felt like shouting.

Wood's observational powers are acute, and used to devastating effect.* It is the tiny things she notices that ground the realism of the story—the way Fiona’s children handle a pet rabbit, a fellow worker's child-like handwriting, the discarded plastic bag on the bus that invokes Stephen’s panic. In particular, the descriptions of passing characters are beautifully spot-on, such as the wealthy inner-city women:

‘They did Pilates and had blunt fringes, wore small rectangular glasses and Japanese-looking clothes so severely ugly you knew they were expensive. ... They called their work my project.’

The security guard on his motorised platform, the overheated women wearing stretchy zebra-print; you realise as you read that you've seen these people before, but never thought to recognise them as their own species.

The human behaviour/animal interactions also struck a particular chord with me. During my psychology studies, I spent many days at the Adelaide Zoo, and was always bemused by how people were obsessed with interpreting the animals’ behaviour in human terms.  Wood illustrates this phenomena beautifully with a small scene involving a bored child observing a Komodo dragon, with her mother insisting, “He’s looking at you!”

‘Stephen had always found this strange, watching people at the zoo; their odd, desperate need for the animals to notice them.’

Similarly, even as a pet owner, I’ve always been nonplussed by shops dedicated to animal paraphernalia such as costumes and perfume (don’t get me started on the doggie bakery which has sprung up near my house), so when Stephen comes across a similar shop in a wealthy suburb and shakes his head over it, I probably related more than I should have. (I love my dog, but I know he wouldn’t know the difference between a Swarovski Crystal lead or a piece of old rope. Anyway. I said don't get me started, and, look, there I went. Sorry.)

Animal People is so brilliantly done, devastating to the final page. (In the kitchen at work, I cried all through the last chapter and a half.) It's testament to Wood's skill, however, that you don't close the book in despair. There is a light at the end of the tunnel for Stephen, but you never see it until Wood lets you. Lest you think this is a tense and serious read all the way through, however, I'd be remiss not to point out the lovely counterpoints; there are some hilarious and cringe-worthy moments in along the way, such as the botched Secret Santa and the forced team-building exercise. (‘We’ve been Adrenaline Learning, and you’ve been great!’ Come back PowerPoint; all is forgiven.)

This is a truly gripping and involving novel by one of Australia's most thoughtful and interesting authors, and also a masterclass for writers in how to take a high concept (such as setting a novel over the course of one day) and execute it flawlessly. Hightail it to your local bookshop and grab a copy!

* If you didn't see it via my Twitter account, here's an excellent article by Wood on one of the tools she uses to help her with this; for if you’re a writer, it will be some of the best advice you will ever receive.

My other AWWC Reviews