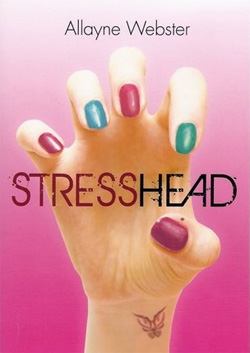 Mum didn’t have all the answers in life—and that scared me. Up until now, I thought she knew it all because she wrote law books. She had to have the answers because she advises her clients on how to fix their problems. So does Dad. That’s what they get paid the big bucks to do. So why didn’t they have the answers in their own lives? How can smart people behave so dumb?

Stresshead is the second Allayne Webster book I’ve read and it’s confirmed something that I had suspected from her first book—Webster is a very underrated YA writer.

Stresshead’s protagonist, Dennie, is in the middle of a teenage maelstrom. She’s having problems with her boyfriend, she’s waiting for her Year 11 exam results, her family of lawyers are pressuring her for career choices, and she’s a natural worrywart anyway, so her head’s pretty much about to explode. Unfortunately, things are about to get a whole lot worse, and not just for her.

One of the things I love about Webster’s writing is that she never talks down to her readers. Her books are crafted in a way that shows respect for her audience's intelligence, which is something I think that can be missing in this genre. Plot points that in lesser-skilled author’s hands would be red herrings or switcheroo set-ups turn out to be serious developments with serious consequences. For a reader who’s used to spotting story developments ahead of schedule, there are plot developments in Stresshead which genuinely come as a surprise.

The relationships in Dennie's family are a highlight of the book. From Belle, Dennie’s steely older sister, to Christopher, the elusive eldest sibling, all of Webster's characters are beautifully drawn and deeply flawed -- some more so than others. Unlike many YA books, the protagonist's parents aren't reduced to background stereotypes, either; Dennie’s ma and pa have a complex and absorbing partnership which is fascinating in its own right, particularly when the wheels start coming off.

Another highlight is Clara, Dennie’s mother’s best friend. A lawyer by day and “functioning alcoholic” by... well, most of the day and night as well, she shows more depth than one initially expects, and has some of the best lines in the book. (Not an easy task as there are some beautifully punchy exchanges throughout.) Even the more secondary characters, such as Jack, Dennie's boyfriend, and Ellie, Dennie’s other sister, are never treated lightly; Webster gives them all resonance and meaning in a few simple lines.

True to Webster’s previous book, Our Little Secret*, Stresshead is, at its heart, a story about serious issues and the baggage that they bring to the people who try to keep them hidden. Webster also never goes for cheap sitcom endings, which is why her writing stays with you long after you’ve closed the book. (Or powered down your eReader; either way.)

I’d love to say a lot more about Stresshead, but I can’t without revealing spoilers so please go and grab a copy for yourself, and keep an eye out for Webster’s work. A real talent and a class act!

My other AWWC Reviews